Since I am gearing up to travel to Ilulissat, the town whose very name means “icebergs”, I figure there is no better time to give a small lesson about ice and icebergs in Greenland. As a disclaimer, I am no glaciologist, so please do not take everything I say to be scientifically precise J But I do know enough from what I have learned in Greenland to provide some useful information. If anybody is interested in a truly spectacular and awe-some portrayal of glaciers, do check out Chasing Ice, a big-screen documentary (by James Balog, National Geographic photographer/cinematographer) that artistically displays how glaciers flow, depress, and calve over time. The images document glaciers in Greenland, Iceland, and the United States.

Ilulissat is especially well known for icebergs because the glaciers in its immediate area (Sermeq Kujalleq and Eqip Sermia) are especially active. They move faster, and thus calve more frequently creating more icebergs, than other glaciers in Greenland and in the whole world! Sermeq Kujalleq, more commonly just called Kangia or the Ilulissat Ice Fjord, is one of the fastest flowing glaciers in the world. It currently flows about 35 meters a DAY while other glaciers in the world only move that far in a year!

However, despite the glacier’s fast pace, it is currently in a state of rapid retreat (moving closer and closer toward land). Glacial retreat IS a natural occurrence, but the rate at which Sermeq Kujalleq is currently retreating is what is unprecedented. Sermeq Kujalleq has actually been slowly retreating since about 1850. But in 1998, the glacier suddenly started flowing twice as fast as before, its surface level depressed, and its floating glacial tongue calved off entirely. In just 10 years, the glacier retreated 15 km (9 miles) when previously it took 80+ years to retreat that far. The Ilulissat Ice Fjord was granted UNESCO World Heritage Site status in 2004, so the area is now protected.

This is a picture of the Ilulissat Ice Fjord, taken in August 2012.

This is a picture of Eqip Sermia, a glacier just north of Ilulissat that calves very frequently, taken in June 2012. It is an extremely popular attraction for tourists. There are sailing tours to view it from the water, and there is also the possibility to stay overnight in small huts/lodges on land close by.

This is a picture of Narsap Sermia, a glacier just north of Nuuk, take in July 2012… and an iceberg that originated from it. 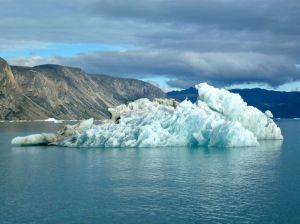 2 thoughts on “A Little Lesson About Ice”