Ever been moved to tears due to an absolutely unbelievable combination of music and nature? It happens all the time at AirZafari!

Music is an incredible tool to highlight an experience, and often, if the association is strong enough, the memory is seared into your mind and comes through as clear as if it was just yesterday, upon hearing that same music again somewhere down the road.

Listening to music while flying is something that always transports me to another place mentally. The right tune paired with the right scene out the little window can be downright epic.

For about 2 years there I had a small compulsion to listen to ‘Kids’ by MGMT upon takeoff.

Or try listening to Adele’s new ‘Hello’ on repeat while landing over the national monuments of Washington, D.C. (Which I may or may not have just done.) It gets you.

A Surreal Serenade in Greenland

AirZafari knows all about the surreal experience of listening to beautiful music while looking to even more beautiful nature. They often play classical melodies through the headsets for travelers while they gaze down at the sheer vastness of Greenland’s landscape.

Check THIS VIDEO created from a flightseeing tour in Kangerlussuaq, Greenland with AirZafari.

There are no words.

Are you flying on Icelandair soon? No, the airline unfortunately has not yet decided to fly to Greenland, but you can still experience Greenland on board in two other ways!

1) Get inspired by this “Tip of the Iceberg” article about nature, gastronomy, and culture in Greenland on page 42 of Icelandair Stopover (summer 2015 edition).

2) Just look out the window! If you’re flying between North America and Europe on a day with clear skies, you can see Greenland from 30000 feet for approximately 45 minutes, and IT. IS. BREATHTAKING. Like this! (I’ve done this maybe 15-20 times and I’m still glued to the window for every second.) 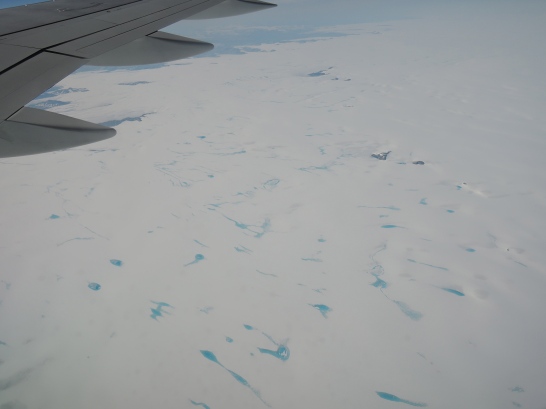 Are you interested to see more footage of Greenland’s landscape from the air? See my Through the Airplane Window: Videos of Flying in Greenland post!

Come fly with me!

Do you like flight videos? Are you the kind of person that likes to visualize what it looks like to land in a country before you travel there? Are you just daydreaming of Greenland?

Well, if you can look past the foggy windows (figuratively, that is) and, at times, shaky filming, then these videos of landing and taking off from various airports and heliports around Greenland (and at different times of the year) can give you the right impression that Greenland is the most majestic place on this earth!

Disclaimer: Every time I shoot one of these videos, I have the highest and most earnest hopes to edit them, add great music, etc. but it just never happens. So I’m abandoning those dreams and simply putting the videos here in their rawest form – take it or leave it! 🙂

The videos are ordered alphabetically by town name.

Early Summer flying over West Greenland via Icelandair (no landing)