Sharon and I started off the day with a nice breakfast provided by CenterHotel Klöpp.  I had flatbread with Icelandic butter, flatbread with different jams (orange and strawberry), melon, and of course, Icelandic Skyr (thick, tart yogurt) with granola. Delicious!

We had signed up for a Reykjavik Excursions tour called the Golden Circle, and the tour company picked us up right at our front door in a small mini coach. It was really quite advantageous to use the tour company because they not only provided the transportation to many sites that we never would have gotten to but also had free wi-fi on the coaches. So essentially, I could email with people back and forth all day, which was wonderful given that it was just my first hours and days away from my boyfriend, friends, and family!

The tour lasted from 830 until 1830 and we went all throughout the South Iceland region. Our guide was named Höskulder but told us we could call him “Hershey”, even though names ending in the “y” sound are more feminine. He narrated the bus ride the entire time and focused heavily on informing us about the geologic history and background of the places we passed and visited. I very much liked this aspect!

Our first stop was in Hvergardi for a bathroom break at this earthquake museum – it was a little contrived, but there were informative signs all about. The interesting part about this town was that it is technically at the bottom of the ocean! The mountain/volcano peaks that can be seen there used to be covered with underwater glaciers, so the lowest part of the valley served as the ocean floor.

Our second stop was in Hrunamannahreppur where we saw this old church – I guess I took a catnap in the bus when Höskulder was telling the meaning of this church because I don’t remember the story behind it!

Our third stop was Gullfoss, this amazingly powerful glacial waterfall! We had about forty minutes here to walk right up to the edge of the waterfall practically.  There was so much mist spraying back from the water that we were soaked even standing back a bit from the edge. I think on our way back to the bus people that were just arriving to the pathway saw our soaked jackets and turned around to go back to the bus!

Our fourth stop was Geysir to see the, well, geysers.  There was only one that erupted frequently, about every 6-8 minutes; it was called Strokkur. There were a couple of other geysirs (Geysir, Litli Geysir, and Two Colors geysir). We spent some time walking around the geysir fields taking photos, and then we went across the street to Hotel Geysir for lunch and to buy souvenirs if we wished. For lunch, I had Samloka m/ Hangikjöti og Baunasalati (Smoked Lamb with Bean Salad). It was good, but the smoked lamb definitely had a strong aftertaste!

After lunch, we drove through the town of Laugarvatn where three men got off the bus in order to go to the Fontana hot spring spa close by. We could see it from the bus, and it was much smaller than the Blue Lagoon Spa but still looked nice and relaxing and hot!

The final stop on our Golden Circle Tour was Thingvellir National Park. It was very beautiful, right on Thingvellirvatn Lake, the largest natural lake in Iceland. This area was rich in geological history as well. There is a large rift valley that can be viewed; it is formed because of the sea-spreading of two tectonic plates (North American and Eurasia) that Iceland spans. It should be noted, though, that the boundary between the two plates is not where the rift occurs, as most people assume. The rift happens because of weakness beneath the plate as it pulls apart – the ground sinks down, as there is not much support for the land above.

Some other things Höskulder taught us while en route:

When we returned to town, we were, again, in search of dinner and this time chose Kaffe Loki on Lokastígur because it advertised traditional Iceland food.  My travel mate and I ordered two menu items – the Braveheart and Dinner II – to share.  Both came with flatbread & butter, fermented shark, and dried fish & butter. The Braveheart added a shot of “Black Death”, a high alcohol-content liquor. I had seen Anthony Bourdain try it on his Travel Channel show, No Reservations, so I, of course, had to follow in his footsteps and try it as well! The Dinner II added flatbread with mashed fish (extremely savory and delicious!), flatbread with butter and smoked lamb, and flatbread with salmon and cottage cheese. Everything was delicious – we devoured every bite! I was sorry that I never got a chance to try the Icelandic meat soup, but I know just the place to get it when I pass back through at the end of September. 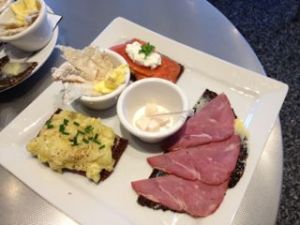 The last thing we did before bed was strategically repack our luggage. The luggage regulations to fly Icelandair are much more forgiving than those of Air Greenland. We managed to get everything down to one checked bag per person (weighing 20 kilos), one carry-on bag each (which they call hand luggage, and could be 8 kilos I think), and one personal bag each like a purse or computer bag. Fortunately, I had meticulously weighed my bags before departing Washington, D.C. so I did not have any anxiety about paying exorbitant “overweight luggage” fees!