Oqaasileriffik – The Language Secretariat in Greenland did a number of things to celebrate International Mother Language Day, including a public event in Katuaq Culture House in Nuuk, where the Prime Minister spoke, and a series of portraits of foreigners who have learned, or are in the process of learning the mother language of Greenland – Kalaallisut (Greenlandic).

I was recommended to participate in this portrait series, and so I gave an interview, from which this poster was created. We were 6 in total, and our posters hung in Nuuk Center as well as in Katuaq. What an honour!

Read my full interview below (in English). 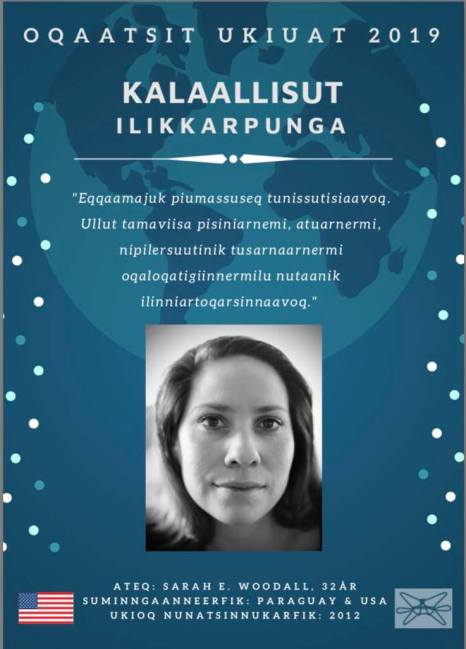 What were your first thoughts about Kalaallisut language?

It is amazing. In the start, of course I could not understand the words, but it was nice, like a song. Actually, that’s exactly how it was. Many times, a song’s lyrics can be felt in your soul, and that’s how it was for me with Greenlandic. As if it was somehow already in my heart. It was not until the learning phase that I realised how hard it is, but it did not matter. It must learn it no matter what.

What was your motivation to learn Kalaallisut?

I wanted to learn Greenlandic even before coming here. In all honesty, I did not know there were other options. My director at that time did say that a good deal of people could speak English, but my thought process was: I took it upon myself to come live in Greenland, so of course I should learn to speak the local language. I think I started going after it seriously the year after I arrived.  I have to say though, I will probably be in a learning phase forever. I hope at some point in the future I will be fluent.

What was the hardest in learning Kalaallisut?

It really requires a good memory, as there are so many suffixes and derivations. There must be at least 200 endings!

What was beneficial learning Kalaallisut?

Facebook really is one of the best resources. My friends are usually writing in both Greenlandic and Danish or English, so I can easily translate. In that way, I am able to learn new grammar and words. Thankfully my network supports me. They are patient, and they understand that I still talk slowly.

What is the most important thing in learning Kalaallisut language?

Remember that willpower is a gift. Learning any language is difficult, and from time to time the road may seem completely impassible. But it will come. Every single day there is something to be learned – by shopping, reading, listening to music and talking with people. Imagine that so few people in the world speak Greenlandic, and yet we do. We should be proud.

The pink text is that which Oqaasileriffik – The Language Secretariat of Greenland selected as a quote to my poster.

Find resources for learning Greenlandic in the “Language” section of my Tips for Tourists page.