Last year I wrote about some statistics and figures related to the nationalities of Greenland’s residents, and I thought I would do it again with the most recent figures to see if there are any significant changes this year over last. (The short answer is: no).

As of 1 January 2016, 11% of Greenland’s population of 55847 people is foreign born, which equates to a whopping 6021 individuals who hail from 51 different countries. This is literally only just a few handfuls of people more than last year, so the proportion of foreign presence is staying quite stable.

Danes account for the vast, vast majority of internationals in the country (76%). Faroese account for 5%, and Icelanders and Thai, 3% each. Filipinos and Swedes account for 2% each, and all others are 1% or less per nationality, including people from Norway, Germany, USA (39 individuals, or 0.6%), Poland, Other Asia, Other America, Other Africa, Bulgaria, Finland, France, Great Britain, Romania, Canada, China, Oceania, Iran, Holland, Italy, Spain, Pakistan, Lithuania, Slovakia, Russia, Other Europe, Sri Lanka, Ireland, Austria, Lebanon, Belgium, Hungary, Turkey, Ethiopia, Iraq, Japan, Latvia, Croatia, Czech Republic, Switzerland, Ukraine, Morocco, India, and Syria. In that order!

The distribution of internationals around the country is also very stable this year in comparison to last year.

And, it’s still true that no matter where you are in the country, you will always be in the minority compared to Greenland-born residents.

Think you could hack it is an international in Greenland?

All figures based off of data published by Statistics Greenland on their Statistics Bank. 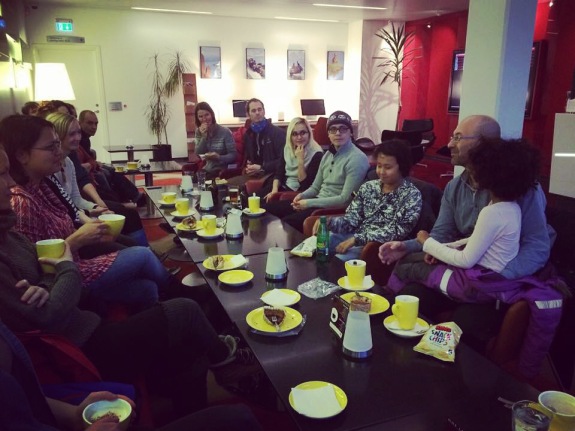 Photo credit: The Fourth Continent. Taken at Hotel Hans Egede in Nuuk, Greenland at an Internationals in Nuuk gathering in October, when Fernando Ugarte, an international from Mexico working at Pinngortitaleriffik (the Greenland Institute of Natural Resources), spoke.

SHOW ME THE NUMBERS

Statistics Greenland tells us that, on 1 January 2015, 11% of Greenland’s population is foreign-born, which amounts to a whopping 6009 people who have decided to make Greenland their new home.

There are some places in Greenland that attract internationals more than others, but whether this pattern is driven by the employers or the internationals themselves cannot be determined here, although, naturally, it is directly related to the availability of employment and level of industry and infrastructure. The top three most populated towns in Greenland – Nuuk, Sisimiut, and Ilulissat – get nearly three-quarters of all the internationals.

But that’s not to say that internationals don’t branch out further. Out of 87 inhabited places in Greenland, 62 of them have at least 1 international living there, although the small settlements have, quite literally, just the one.

If living somewhere with a high international-to-Greenland-born ratio is of greatest importance to you, then, aside from Nuuk, you would fare better in Kangerlussuaq (21% international) or Narsarsuaq (17% international) than in Sisimiut or Ilulissat. However, the tradeoff is that Kangerlussuaq and Narsarsuaq are both small settlements with populations of 510 and 145, respectively, and with an infrastructure centered entirely on operating an international airport and the tourism it facilitates.

Are you soon going to be an international in Greenland? There’s a book for you!